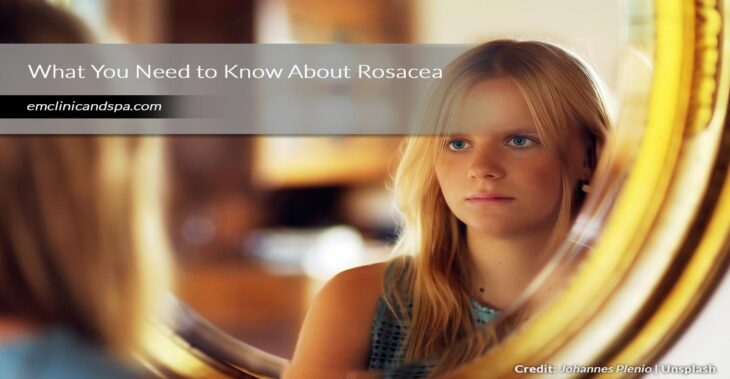 What You Need to Know About Rosacea

If your face remains red even though you aren’t blushing, you may have rosacea.

What exactly is rosacea, and is there anything you can do to treat it? Here is what you need to know about rosacea:

Rosacea is a chronic skin disease that causes redness and visible blood vessels in your face. It can produce small, red, pus-filled bumps on your skin. It also typically only affects the skin on your forehead, nose, and cheeks. Over 3 million Canadians are affected by this skin condition.

Rosacea can affect you in different ways. There are four subtypes. Each one also has its own set of symptoms, and you may have more than one subtype of rosacea at a time. Here are the following types:

Surprisingly, the causes of this skin condition are still unknown. As far as can be determined, rosacea is thought to be caused by a combination of the following factors: Individuals with rosacea often have family members who have the same condition, suggesting that there could be a genetic or inherited component.

There are several genes in a family called the human leukocyte antigen (HLA) complex thought to be related to rosacea. The HLA complex assists your immune system in differentiating your body’s proteins from proteins created by foreign invaders. Each gene has many variations, which allows your immune system to react to a wide range of foreign proteins. Specific variations likely contribute to abnormal inflammation.

A combination of these abnormalities and a disruption of the skin barrier indicate the signs and symptoms of rosacea.

Scientists have also considered Demodex folliculorum to be a potential cause of rosacea. This is a type of mite that lives predominantly within the hair follicles on human skin. It feeds on dead skin cells and sebum, and is usually not harmful.

Many studies found that individuals with rosacea have large numbers of D. folliculorum on their skin. However, they also appear abundantly on people who don’t have this condition. It is unclear whether the mites cause said skin disease or if rosacea causes the increase in mites.

Previously known as Campylobacter pylori, Helicobacter pylori is a type of bacteria that can enter your body and live in your digestive tract. It is one of the major causes of gastrointestinal ulcers, chronic gastritis, and gastric cancer. It could also play a role in the development of rosacea.

Some studies suggest that these gut bacteria can raise the amount of gastrin, a digestive hormone that might cause your skin to look flushed. However, scientists can’t prove that H. pylori causes rosacea since many individuals who don’t have the skin condition have an H. pylori infection.

While the symptoms and signs of rosacea can differ considerably from one individual to another, the following tend to be present in most cases: You may have bloodshot, irritated, or watery eyes if you have rosacea. Your eyelids can become red and swollen, and it’s also common to develop styes. You might notice visible blood vessels around the lid. Extreme cases can result in corneal damage and loss of clear vision without medical assistance. Flushing or frequent blushing occurs when your face temporarily darkens. It can start from the front of the head and spread down to the neck and chest. The skin might also feel unpleasantly hot as the warmth or burning comes and goes. It’s usually an early feature of the skin condition.

Persistent skin discolouration refers to a flushed or sunburnt look that doesn’t seem to go away. It happens when hundreds of small blood vessels near the surface of the skin expand. It’s also the most common symptom of rosacea. Small, red, acne-like bumps or pus-filled pimples often develop on the face. Although they can resemble acne, there are no blackheads, and burning or stinging can occur.

Due to excess tissue, the skin may enlarge and thicken. It usually involves the nose and can cause rhinophyma. This condition is less common and affects males more than females. If severe, it can lead to inadequate nasal airflow and facial disfigurement.

Telangiectasia is a condition in which visible tiny blood vessels cause prominent red threadlike lines or patterns on the skin. These are prominent among many people with rosacea. They usually affect the bridge of the nose, cheeks, and other central parts of the face.

Unfortunately, this skin condition is not curable, but you can manage the symptoms by using various remedies. Here are some of the best possible treatment options for rosacea: Oral antibiotics can have anti-inflammatory effects, and they tend to give faster results compared to topical ones.

Accutane or Isotretinoin is an oral medication that people can use in severe cases of rosacea. It’s a powerful drug that prevents the skin from making oil.

Take note that the side effects can be severe, and this is unhelpful for people with ETR rosacea.

Dermatologists can administer laser treatment to lessen the visibility of blood vessels. This treatment shrinks them with the use of intense pulsed light.

Using skin creams can help lessen skin discolouration and inflammation. Doctors might recommend using them once or twice per day. They may also prescribe camouflage creams that can cover blemishes on your skin.

Rosacea is a common skin condition that affects lots of people. While it doesn’t have a cure, it’s not something that should scare you. If you do have it, learning to properly manage and treat its symptoms will significantly reduce its effect on your life.

If you’re looking to resolve your concerns regarding rosacea, look no further than EM Clinic. Our team of professionals can provide you with a customized treatment that is sure to help. You can contact us by calling (519) 668-7449 or email us at info@emclinicandspa.com.

Practicing Self-Care During the Holidays

All About Varicose Veins

Types of Hyperpigmentation and How to Manage Them

What You Need to Know About Tattoo Removal

All About Varicose Veins

What You Need to Know About Rosacea

Practicing Self-Care During the Holidays

How to Minimize Enlarged Pores